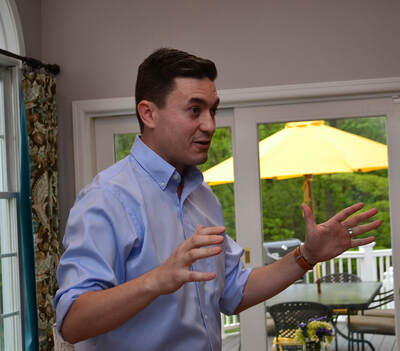 Mike Inganamort is the mayor of Chester Township, where he and his wife Lauren are raising three daughters. Mike previously served  on the Township Council, including three years as Council President.   He was the Council's longtime liaison to the municipal court and the Parks Committee, and also rotated as liaison to the finance office, the Board of Health, the Recreation Committee, and the Office of Emergency Management.   As finance liaison, he was instrumental in developing  budgets that held taxes  flat  despite greater contributions to the capital improvement fund.

Mike co-founded a working group of western Morris County municipalities that has forged new, cost-saving shared service agreements in the areas of public works, municipal courts, and animal control. He previously served on the Chester Township Planning Board.

Mike is an active member of the New Jersey League of Municipalities and its Legislative Committee on Tax & Finance. He was recognized by the League in 2023 as a Municipal Pioneer for his contributions to local government.

​As a volunteer Merit Badge counselor and Eagle Scout, Mike works with local Scouts on the citizenship merit badges and often talks to area troops about civic duty.

Mike earned a Bachelor's Degree in Political Science from American University and a masters degree in American Government from Georgetown University.  He held numerous staff positions in the U.S. House of Representatives and at the Department of Interior. Mike has managed two successful Congressional campaigns and served in a consulting role on dozens more.  He is a member of the American Enterprise Institute's Leadership Network and was named to NJBIZ's Forty Under 40 List.
Inganamort