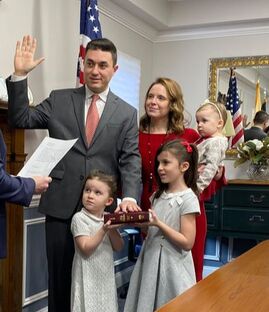 Mike was re-elected to the Chester Township Council in 2020 and is in his third year as  Council President. He was instrumental in developing the town's 2019 and 2020 budgets, which held taxes flat despite greater contributions to the capital improvement fund.

Mike co-founded a working group of Morris County municipalities that has forged new, cost-saving shared service agreements in the areas of public works, municipal courts, and animal control. Mike has been the Council's liaison to the municipal court and the Parks Committee for several years, and has also rotated as liaison to the finance office, the Board of Health, the Recreation Committee, and the Office of Emergency Management. He previously served on the Chester Township Planning Board.

​As a volunteer Merit Badge counselor, Mike helps local Scouts with the citizenship merit badges.
Professionally, Mike is a partner at ASG Advisors, where he develops communications strategies for corporate and public foundations seeking to achieve policy change. He’s connected the private, public, and nonprofit sectors to increase key health indicators in targeted New Jersey communities, expand school field trips across the state, and secure the right of hospitals to perform elective surgeries. He developed the roll-out of the Boston College study showing $70 billion in wealth leaving New Jersey, which was highlighted in  several State of the State addresses.

Mike earned a Bachelor's Degree in Political Science from American University and a masters degree in American Government from Georgetown University.  He held numerous staff positions in the U.S. House of Representatives and at the Department of Interior. Mike has managed two successful Congressional campaigns and served in a consulting role on dozens more.  He has been a member of the American Enterprise Institute's Leadership Network and the Foreign Policy Initiative's Leadership Network.

Mike is passionate about citizen diplomacy and serves on the American Council of Young Political Leaders (ACYPL) Board of Trustees. He has represented the United States with other young elected officials as part of three delegations, traveling to El Salvador and Guatemala in 2012, Morocco and Tunisia in 2016, and Mexico in 2019. In addition, he has hosted visiting delegations from Australia and Egypt.
Inganamort